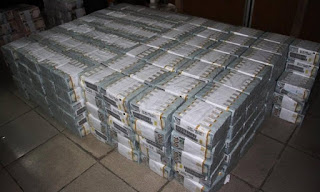 The federal government says the whistle-blower that provided information which led to the recovery of N13bn in Ikoyi will get his commission this week.

According to reports, the Minister of Finance, Kemi Adeosun, has directed the release of the money.

“The money for the payment of the Ikoyi whistle-blower is ready and that money is ready for release this week,” a source in the ministry told our source.

“A directive has already been issued that the money should be released to the whistle-blower and that will be done before the end of the week.”

Recall that the Federal Government’s whistle-blower policy gives informants between 2.5 per cent and 5 per cent of any recovered money.
Posted by Unknown
Labels: Politics