Menu
Home » Crime » Father Strips His Daughter Unclad In Obudu, Ties Her Up For Stealing His Mineral

Father Strips His Daughter Unclad In Obudu, Ties Her Up For Stealing His Mineral 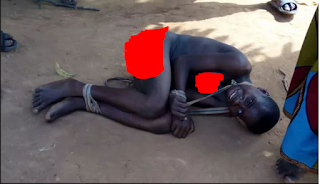 This is quite disheartening. A man is cooling his heels in police cell after tying the hands and legs of his daughter for allegedly stealing his mineral in Obudu local government area of Cross River state. The man who is said to be a native of Abakaliki, the Ebonyi state capital reportedly attracted attention when he tied his daughter in such a wicked manner after stripping her unclad.

According to reports, neighbors alerted the man's kin from Abakaliki resident in Obudu who arrived the scene minutes later and apologized.

The unidentified man is said to have run away but reports say he was later arrested by the Police and is currently in custody.
Posted by Unknown
Labels: Crime