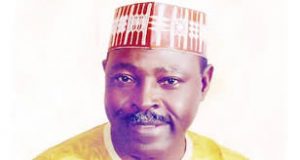 Ahead of the Saturday national convention of the party, the Plateau State Chapter of the Peoples Democratic Party (PDP) was thrown into mourning, on Thursday, as the chairman, Hon. Damishi Sango was kidnapped with five others along Jere village, Kaduna State.

The Daily Sun gathered that the Sango was kidnapped at about 7:00p.m., on Wednesday, with his son, a chieftain of the party, Chief Emmanuel Mangni, a driver, an Orderly and one other person while travelling to Abuja ahead of the PDP convention.

Secretary of the party, Hon. Emmanuel Tuang, disclosed this in an interview with Daily Sun at the party secretariat, in Jos, and said the party has no formal communication from the abductors.

His words, “We finished a meeting of the State Working Committee of the Party at about 1pm on Wednesday and he left for Abuja in preparation for the PDP convention coming up on Saturday and we spoke with him at about 3 pm.

“We could not communicate until I slept at about 8 pm when his lines were switch off. I woke up this morning with a lot of missed calls and when I called his Personal Assistance, he broke the news that Chairman was kidnapped on his way to Abuja.

“We have send a team to the State Police headquarters to report the matter. We have no communication with the six occupants of the vehicle including the abductors and no ransom has been made.

“When the Personal Assistance to the Chairman called the mobile phone of the Son who was in the vehicle to find out if they had arrived Abuja, the DPO of Jere Police division picked the call and said the phone was found inside an abandoned jeep parked along the road and they suspected that the occupants have been kidnapped.”
State Publicity Secretary of the party, John Akans, said Sango had gone to secure an hotel accommodation for delegates ahead of the Saturday PDP convention in Abuja.

Former Commissioner of Finance in the state, Davou Mang, and PDP supporters, stormed the PDP Secretariat, in Jos, at about 7:00a.m. on Thiursday, expressing grief over the sad incident.

Mang, however, called on the Federal Government to beefed up permanent security post along the route for safety of innocent citizens, particularly during the Saturday PDP convention.

Hon. Sango, a former Minister of Youth and Sport, has vowed that PDP would take over governance in Plateau and Nigeria in 2019.
Posted by Unknown
Labels: Politics