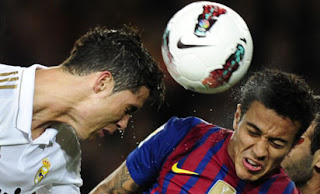 The first El Clasico of the 2017/18 LaLiga Santander season between Real Madrid and FC Barcelona is set to take place on Saturday  providing for great family viewing for Spanish fans and also allows fans all across the world to experience the El Clasico in prime time. Real Madrid’s Portuguese forward Cristiano Ronaldo (L) heads the ball next to Barcelona’s Chiliean forward Alexis Sanchez (R) during the Spanish League “El clasico” football match Barcelona vs Real Madrid at the Camp Nou stadium in Barcelona on April 21, 2012. Real Madrid won 1-2. AFP PHOTO The first Clasico of the campaign will once again break records that only a select few sporting events in the world can compete for. The fixture will be broadcast live in 188 countries, with potential viewing figures of 650 million, reinforcing its international magnitude.