Dangote emerges only African on Bloomberg list of 50 Best Persons 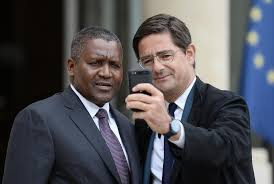 Aliko Dangote, The President of Dangote Group, has emerged one of the selected best 50 persons in the world in 2017. Bloomberg on Monday announced The Bloomberg 50, a new, annual, multi-platform initiative that honours 50 icons and innovators who have changed the global business landscape in measurable ways over the past year.


Note that the first Bloomberg 50 honorees were selected by the Bloomberg Businessweek team after months of input from many of Bloomberg’s 2,700 journalists and analysts around the globe, leveraging the resources of the Bloomberg Terminal, and represents the most influential thought leaders in business, finance, technology and science, politics, and entertainment. The executives, entrepreneurs, experts, and entertainers on the Bloomberg 50 all have a quantifiable metric underpinning their inclusion.

Here is what Megan Murphy, editor of Bloomberg Businessweek, has to say:

“What sets The Bloomberg 50 apart from other lists is that each person chosen has demonstrated measurable change over the past year.”
“Readers will find many names they recognize, but will also discover new visionaries—people who are impacting the world in significant ways, and are rapidly gaining the attention they deserve."
Posted by Cheta Igbokwe
Labels: Business