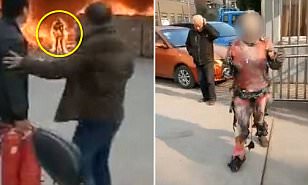 This is the horrifying moment a worker turned into a human fireball after rushing back to a factory in east China to get his phone.

Onlookers had to blast fire extinguisher towards the burning man and called for ambulance service immediately.

It's reported that he is still staying in intensive care unit after treatment.

Footage emerged on Pear Video showing that a factory in Ningbo of Zhejiang Province burst into flames in the afternoon of December 11.

The premises were confirmed to be the China Hookah Manufacturing Company.

The cause of fire remains unknown.

He can be seen walking around with torn clothing after colleagues putting out the fire on him.

Jiulonghuzhen, the local town official released a notice on Weibo, a Twitter-like social media platform, confirming that the fire was put out after two hours.

The injured worker was sent to hospital for treatment. He is now recovering in stable condition.

China Hookah Manufacturing Company responded to Pear that the worker was one of the first to evacuate, but he returned to retrieve his mobile phone.
Posted by Unknown
Labels: Foreign affairs