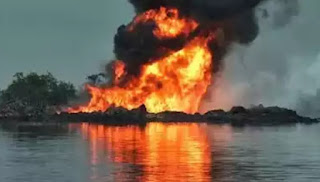 “An explosion occurred at 8:45 am (0745 GMT), followed by a fire. Things are under control but according to preliminary reports there are several people injured,” police spokesman Edmund Tragschitz told AFP.

The Kronen-Zeitung daily reported on its website that 60 people were hurt and that several fire brigades from the surrounding area were called in.

The cause of the incident was not immediately clear.

The Baumgarten gas hub is Austria’s largest reception point and the main distribution hub for natural gas imports from Russia, Norway and other countries.

Located near Austria’s eastern border with Slovakia, it is also one of Europe’s most important gas hubs, handling some 40 billion cubic metres per year.
Posted by Cheta Igbokwe
Labels: Accident. News, International news