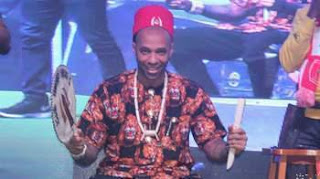 Having missed the Fifa World Player of the Year twice – narrowly, Thierry Henry can now have something to cheer about as he was on Sunday crowned King in Nigeria.

The 40-year-old who is Arsenal’s top goalscorer of all time and currently second assistant manager of the Belgium national team was enthroned as ‘Igwe’ (King) of football after he was dressed in an Igbo royalty garb during an event organised by Guinness Nigeria.

During his active football days, Nigerians would scream ‘Igwe’ whenever he scores a goal or show his dribbling skills.

Making him a king in Africa’s biggest nation is not a bad one for the Frenchman who ranks amongst the greatest strikers football has ever produced.
Posted by Cheta Igbokwe