Menu
Home » Politics » Akwa Ibom Swears In 31 LG Chairmen, while Imo has none

Akwa Ibom Swears In 31 LG Chairmen, while Imo has none 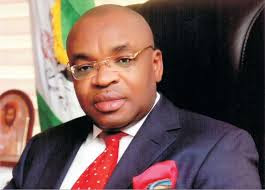 Udom Emmanuel, the Akwa Ibom State Goveernor, has sworn in new 31 local government area chairmen elected last Saturday. Peoples Democratic Party (PDP) won all the 31 chairmanship and 310 councillor-ship seats in the election. The election was described by the state electoral council and observers as credible and transparent.
At the swearing in, in Uyo yesterday, the governor challenged the new council heads to uphold the tenets of the state government in delivering good governance to the people and always put the people first. Emmanuel also tasked the new chairmen to follow democratic processes in managing their councils, which he described as the grassroots of political leadership.
The brief ceremony, which took place at the Banquet Hall of the Government House, was witnessed by a huge crowd, comprising members of the State Executive Council and the legislature, family members, party supporters and the public.

However, in Imo State, it is on record that for the past three to four years, their is not grassroot Government of the Local Government.
Posted by Cheta Igbokwe
Labels: Politics