2019: Kano People Are In My Pocket - President Buhari 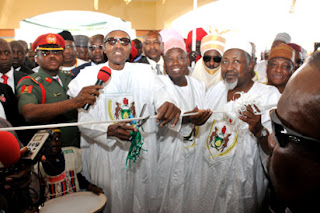 Muhammadu Buhari on Wednesday made his first trip as Nigerian president to a key state, in the latest sign of his return to the national stage after months of illness and treatment abroad.

The 74-year-old’s two-day visit to Kano, northern Nigeria’s largest city and capital of one its most populous states, will also be interpreted as an indication he is seeking a second term of office at elections in early 2019.

The ageing head of state has hardly been seen outside his residence in Abuja since returning in August from months of treatment in London for an undisclosed ailment.

But last month, he toured three southeastern states, which analysts saw as a test of how well he fared on the stump, with possibly months of arduous campaigning ahead.

Speaking at the palace of the emir of Kano, Muhammadu Sanusi II, Buhari gave little away about whether he planned to seek a second, four-year term.

Buhari made history at the last elections by becoming the first opposition candidate in Nigerian history to defeat a sitting president.

He won nearly 90 percent of the vote in Kano state, where victory is vital for securing an overall majority countrywide.

Nigeria’s next president is expected to be from the north because of an unwritten rule to “rotate” power between the Muslim-majority north and predominantly Christian south.

Buhari was joined on Wednesday by governor Umar Ganduje, who is also expected to seek a second term of office, as they opened and inaugurated a series of infrastructure projects.

Kano — the main commercial hub in northern Nigeria — has not escaped violence from Boko Haram, the armed Islamist group that has waged a deadly insurgency since 2009.

In November 2014, at least 120 people were killed in a suicide bomb and gun attack at the Grand Mosque in Kano, which is next to the emir’s palace.

Buhari said the whole country suffered if there was instability in the north.

“This is why the government’s priority is to make sure that Boko Haram is defeated,” he said. “It is not only for the northeast, it is for the rest of Nigeria.”

But he called for time in his signature fight against corruption, which has yet to produce any high-profile convictions, despite a string of well-publicised arrests.

“People should be patient and not expect things to change overnight,” he said.

More than 1,100 corruption cases are currently before the courts and observers said it was unlikely substantial inroads would be made before the next election.
Posted by Unknown
Labels: Politics