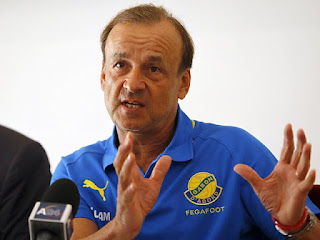 Super Eagles coach, Gernot Rohr, has confirmed that 18-year-old German-born Fortuna Dusseldorf goalkeeper, Maduka Okoye will be available to him ahead of the World Cup.

The Super Eagles are still searching for goalkeeper after the first choice, Karl Ikeme was hospitalised with Leukaemia.

The Franco-German coach who is in Russia for tomorrow’s World Cup draw told Own Goal that he will add Okoye to his pool of players next year when they play their friendly games.

He said, “There’s another goalkeeper we have in our sight now. He plays with Fortuna Dusseldorf in Germany, Maduka Okoye, born in Germany but has agreed to play for Nigeria.

“We will look at him in the coming games to see if he will be able to push for a spot in the team we are preparing for the World Cup.”

Born in Germany to Nigerian parents, Okoye is yet to man the goal for the first team of the second division team in Germany, and only made his debut for the U23 in October.
Posted by Unknown
Labels: Sports