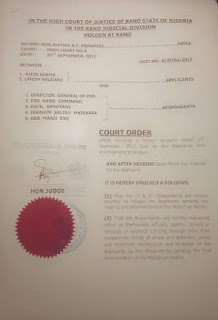 Your hard earned built reputation in the eyes of Nigerians and the world over is not in doubt, Nigerians and indeed the people of the World are all sanguine and optimistic that your ascension to power on the 29th of May 2015 is a blessing for Nigeria and the African Continent, as it heralded a new down in Nigeria for the prevalence of rule of law, adherence to the doctrine of separation of powers, respect for fundamental human rights, equality before the law and constitutionalism.

It is equally our belief and the believe of Nigerians and the world that corruption and abuse of public office will be a thing of the past or at least reduced to the minimal level under your watch. But to our utter surprise and dismay some elements holding public offices are bent towards spoiling your hard earned reputation and integrity by indulging in abuse of public office with impunity, abuse of office and corrupt practices.

Our husbands, Mr. Nitin Verma and Umesh Asudani are subjected to series of arrests, intimidation and persecution by various security agencies in Nigeria for an offence they never commit. Having being arrested and detained by EFCC Kano Command for a week, and currently facing investigation at the said EFCC since June 2017, the DSS Kano Command arrested our innocent husbands and conveyed them to their Headquarters in Abuja. Our lawyers went to court to enforce our husband’s fundamental human rights. On the 25th day of September, 2017 Hon. Justice A T Badamasi of High Court No. 4 Kano ordered for the release of our husbands forthwith. Since, then it is now two (2) months that our husbands are detained incommunicado in flagrance disobedience to the above stated court order and the rule of law. It should be noted that our innocent husbands are subjected to this humiliation based on the same matter and complaint before EFCC. I e, matter arising purely out of business transaction of which our husbands were never party too.

The role played by our husbands were purely that of introduction, and agency.

But, to our utter dismay, we learned through our lawyers that SSS under Lawan Daura is investigating our husbands of Money Laundering case. Your Excellency sir, if there is one Money Launderer within our Indian Community in Nigeria is the complainant Mr. Kapil Sangtani. Your excellency sir, the company on whose quarter Mr Kapil Sangtani is working and residing in Nigeria is called NORA TRADING. It is a pure trading company by object. However, it is a known fact that Mr. Kapil Sangtani is never into trading. A simple investigation into his FCMB accounts No. 3617104018 and other accounts connected therewith is enough to reveal the real crime of Money Laundering he is engaged in. These facts are well known to DSS, but they choose to ignore it because the complainant’s lawyer was a retired Director of DSS and when he saw how investigation is turning against his client at EFCC, he rushed to DSS, complaint and lied to the DG of DSS t hat EFCC is not helping him and his clients. Base on this, DSS came in illegally just to satisfied the complainants and their lawyer.

Your Excellency Sir, our husbands went to court for the enforcement of their fundamental rights of which they obtained an exparte interim injunctive order restraining DSS and all the complainants in the case from harassment, arrest and detention, intimidation and inviting them pending the hearing and determination of the substantive matter.

Your Excellency Sir, despite the said Court Injunctive Order duly served on them, in flagrant disregard and disobedience of the lawful order of the court, DSS refused to released our husbands and it is now over 60 days. This is impunity of the highest order.

The court order dated 26/9/2017 is hereby attached for your kind perusal. Your Excellency sir, our husband’s lawyers had on 10th day of October, 2017 written to your Minister of justice as the custodian of the rule of law and constitution to intervene. A family friend had met him, gave him a copy of the letter and the order wherein he frowned at the injustice meted to our husbands by DSS and promised to intervene, but all to no avail. What we here instead, is that the DG said no man can save our husbands unless they admit to pay over 1 billion Naira to the complainants. Our husband are salary earners and struggling business men. They never cheated the complainants or anybody. Investigations at EFCC already showed to these facts. This is abuse of power, corruption, use of state apparatus to favour individuals.

Your Excellency Sir, in your oath of office, you undertook to be just to all manner of people in Nigeria without fear or favor, affection or ill will,
We equally hold the belief that you cannot fold your arms and see the rights of innocent and helpless foreign Nationals being violated by detaining them incommunicado for over 60 days now by the DSS on a matter purely not within the statutory duties of the DSS. For the avoidance of doubt, the DSS is established by the National Security Agencies Act of 1986 (now 2004) and is under the same Statute vested with the following responsibilities and duties as follows: -

Section 2 sub 3 (a-c) provides for their general duties as follows: -

a.The prevention and detection within Nigeria of any crime against the internal security of Nigeria.

b. The protection and preservation of all known military classified matters concerning the internal security of Nigeria. And

c. Such other responsibilities affecting internal security within Nigeria as the National Assembly or the President as the case may be, deem necessary.

Your Excellency sir, from the foregoing statutory provision, it is glaring that the DSS do not have the legal backings to delve themselves into entertaining or investigating matters which are not a national security concern to Nigeria. The dispute if any is a commercial transaction.

Base on the counter affidavit to our lawyer’s processes filed by DSS, they said they are investigating a case of Money Laundering. Even as that the matter is currently been investigated by EFCC Kano Command and they have no mandate over it.

Your Excellency Sir, it is unbelievable that under your administration, our husbands, two Indian Nationals with huge investments in Kano Nigeria especially of Agro Allied Produce who employed hundreds of Nigerians working in their factories, be subjected to this illegal, unconstitutional, tyrannical and oppressive treatments. To wit arresting and detaining them incommunicado for over 60 days, this is despite being served with the injunctive court order restraining them from inviting or arresting the Indian nationals pending the hearing and determination of the substantive suit. Moreover, the matter is being investigated by the EFCC. This, if not controlled, will definitely sends back signals to the Indian Authorities and communities, the international community and the world over, that Nigeria under your watch is backsliding back to the murky waters of injustice, disrespect of rule of law, abuse of office and wanton disregard for human rights.

Your Excellency Sir, it is unfortunate that counsel for the complainants namely Ado Ma’aji Esq who happened to be a retired assistant director of DSS got into private legal practice after his retirement, is the brain behind all these. He, we belief, orchestrated their arrest and detention incommunicado using his influence as the retired DSS personnel. He even informed our husband’s lawyers that he was not satisfied with the investigation of EFCC that was why he brought the matter to his former office, the DSS, and that he wanted our husbands to accept liability and write undertaking for the payment of over One Billion Naira, thereby converting DSS into pseudo police station and court of law which tried our husbands, convicted, sentenced them to incarceration incommunicado and order them to pay compensation. This is unacceptable in any civilized society.

In conclusion Sir, we urge you to use your good office and intervene in the matter so that these husbands who brought investments and employments to hundreds of youths, can regain their freedom. We equally urge you to direct DSS to comply with the said Order of the Court.

We equally demand for the arrest and prosecution of all DSS personnel who abuse their office with impunity, disobey a court order and allow a retiree to influence them into illegality and corruption. Sir, abuse of office is a serious act corruption and you promised to fight corruption. 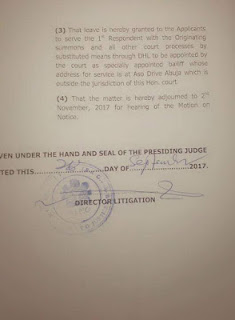 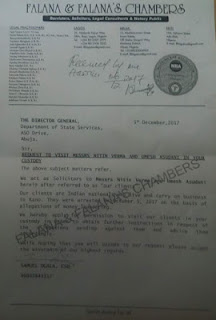 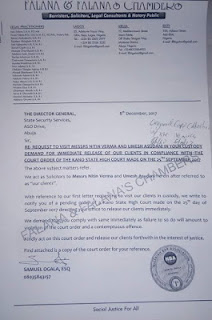 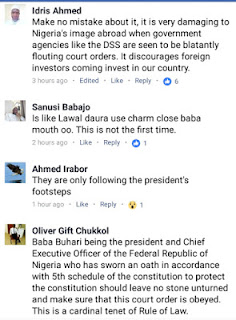 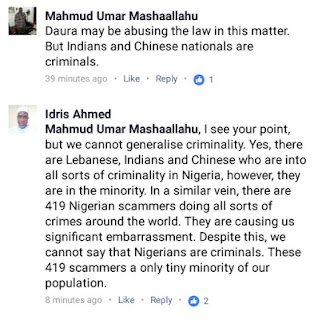