A+ A-
Print Email
GOVERNOR Nyesom Wike of Rivers State has said that the Federal Government must, as a matter of urgency, release funds for tackling of issues of environmental degradation and security in the Niger Delta.     GOVERNOR Nyesom Wike said that while he will not condemn the release of a whopping $1 billion to tackle Boko Haram, the environmental and security challenges in the Niger Delta far outweigh the Boko Haram conflict. The governor spoke during the Annual General Meeting of Okpo Club of Nigeria (Association of Ikwerre Lawyers), weekend, in Port Harcourt. He requested the Federal Government to release the derivation component of the Excess Crude to the oil producing states of the Niger Delta. He said: 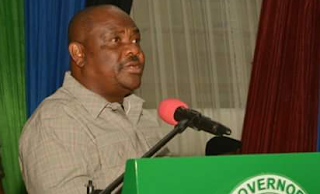