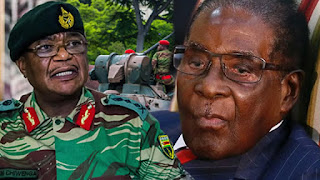 The head of the African Union on Wednesday said the crisis in Zimbabwe “ seems like a coup ” and called on the military to halt their actions and restore constitutional order.

Alpha Conde , who is also Guinea ’ s president , said the AU condemned the actions of top brass in the southern African nation as “ clearly soldiers trying to take power by force ”.

“ The African Union expresses its serious concern regarding the situation unfolding in Zimbabwe, ” a statement sent to AFP said , expressing support for the country’ s “legal institutions” .

The African body further demanded “ constitutional order to be restored immediately and calls on all stakeholders to show responsibility and restraint , ” it added .

The Zimbabwean military took control of the country on Wednesday after a struggle to succeed 93 - year- old President Robert Mugabe erupted in public , culminating in the sacking of the vice president , Emmerson Mnangagwa .

Mugabe is under house arrest , according to a conversation reported by President Jacob Zuma of South Africa .
Mugabe “ indicated that he was confined to his home but said that he was fine , ” the South African government said in a statement .
Posted by Unknown
Labels: Foreign affairs