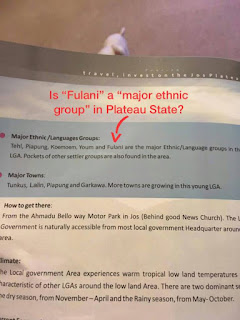 In the midst of petition on banning of open grazing and incessant attacks by Fulani herdsmen across Plateau state, concerned youth across the state have registered their anger and disappointment once again after screenshots of a publication of the latest Plateau State tourism booklet surfaces and is making rounds on social media listing Fulani as a major ethnic group in both Mikang and Qua’an Pan LGAs of the state.

The concerned youths cutting across the 17 LGAs of the state belonging to various youth and cultural groups are planning on a joint protest demanding answers on why Fulani was listed as a major ethnic group on profile pages of Mikang and Qua’an Pan LGAs.

Speaking on the phone with our reporter, member of the group, Nuhu Dadoet said, “We want answers, the government should show us the ancestral homes of the Fulani in Mikang and Qua’an Pan that’s all”.
Another member also refer us to the government’s official website listing Kanuri as a tribe in Plateau state.

With Benue and Taraba states banning open grazing to curb Farmer/Herdsmen clashes and Alago in Awe LGA of Nasarawa State raising alarm and resisting Gov Almakura’s plan of accommodating 10 million cows in their locality, Plateau youths are alarmed at the silence of its government over the issue of resolving Herdsmen/Fulani clashes through making a stand on the issue of open grazing
Posted by Unknown
Labels: Politics