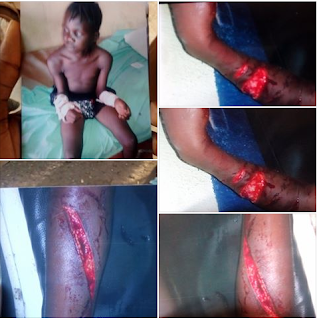 A woman has been accused of brutalizing and injuring her own stepdaughter at Ikorodu area of Lagos. According to Peter Williams, the woman claimed that her own daughter was wounded with a razor blade by her stepdaughter as she decided to retaliate by cutting this little girl's two hands and legs.

According to reports, the woman has been arrested and the case transferred to Ogijo police station in Ogun state.

My people Look at what a wicked step mother did to her step daughter in my area at ita oluwu area off sagamu road, ikorodu, Lagos. The report we gather concerning this matter is that the step mother accused this young girl of using razor blade to cut her own daughter but the truth is that the girl knew nothing about it at all. The girl two hands and one leg damage. The girl is a student in my school.
Posted by Unknown
Labels: Crime