Why I Will Never Leave APGA For APC - Obiano 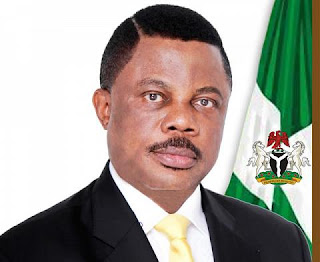 Freshly re-elected governor of Anambra state, Willie Obiano has openly stated that he has no plans of leaving the All Progressives Grand Alliance(APGA) for any other party despite widespread speculations that he intends to decamp to the Ruling All Progressives Congress(APC).

Obiano while speaking to Statehouse correspondents on Thursday at the Presidential Villa, shortly after a 'Thank-you' visit to President Muhammadu Buhari, dismissed all the rumours. In his words;
"No. Never. That is totally unfounded. I will never leaver APGA, I’m the leader and the BoT chairman of APGA and again by God’s grace the governor and governor-elect," he said.

The governor also used the opportunity to hand out an Olive branch to his opponents in the state, adding that they should all work together to build the future of Anambra.

"To win 21 over 21 is not an easy task, it just showed the faith the people had in me and that is exactly why it happened and I thank Ndi Anambra for the confidence reposed in me and I reassure them that this will encourage me to work harder.”

My party is very strong in the South-east and you will see very soon in the coming elections and from there we will match on."
Posted by Unknown
Labels: Politics