Traditional Ruler Who Bagged Degree At 73 Set For Law School 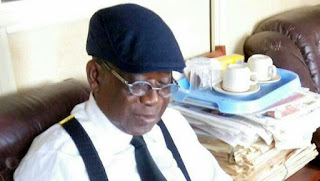 A traditional ruler in Ogun State, Nigeria, Olufemi Ogunleye, who recently obtained a degree in Law at the age of 73, has been admitted into the Law school.

Mr. Ogunleye, the Toluwade of Akinale in Owu Kingdom of Egbaland, graduated with a Second Class Upper degree from Crescent University, Abeokuta, an institution founded by Bola Ajibola, a former Nigerian Attorney-General and ex-judge at the International Court of the Justice.

The traditional ruler was a journalist before mounting the throne, having served with the Daily Times for over a decade and as Group Public Relations Manager of the defunct Nigeria Airways.

Speaking on his law academic pursuit, he said in his palace on Sunday that after obtaining his degree he was set to commence his nine months programme at the Law School in Lagos.

The monarch said he is to resume class alongside his school mates on Monday.
He added further that he will live in the hostel with his course mates.

“I am to stay in the hostel, and have equally secured hostel accommodation,” he said.
Posted by Unknown
Labels: Education