THE NIGERIAN POLICE: CHALLENGES AND SOLUTIONS. 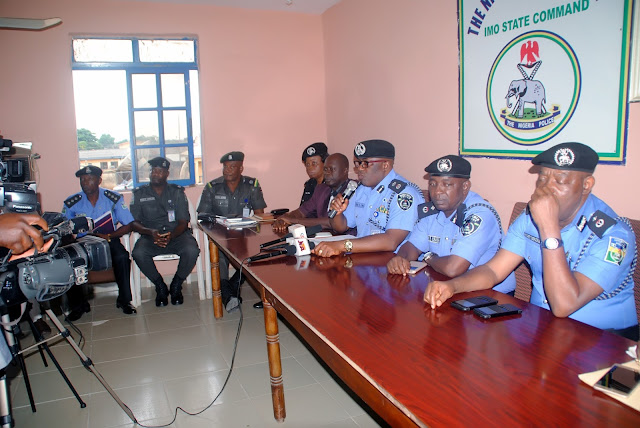 Much has been said about the Nigerian police, most of it from the negative angle. Most writers have taken to saying ills of our police force. They do this without actually knowing what it takes to achieve the kind of policing they want. I have not read or seen an article, both in the local and national tabloids, dedicated to appreciating the work of our able and ebullient Police Officers.
Admittedly, Nigeria, like every other nation, is never free of crime and insecurity. Boko Haram, and by extension, the Fulani Herdsmen, could be regarded as the terrorist groups in the country. Boko Haram has been terrorizing the country non-stop and has continued to undermine the sincere efforts of the police at combating crime. These efforts were meant to ensure safety and to secure our property.
The Boko Haram menace has been the reference of fellow writers who lambast the Police and accuse them of laziness and lackluster attitudes. These, they claim, have been purportedly observed in the discharge of police duties.

However, one thing is crystal clear. There is no country in the world free of crime and corruption. In fact, Nigeria doesn't appear on the list of the first fifty most corrupt countries in the world. This is information according to the latest release by Forbes magazine. I won't bother to mention the countries here. But it is to the credit of the Nigerian police that most countries that Nigeria respects are more corrupt than we are. The Nigerian Police deserves respect and commendation, although as the saying goes: a prophet is never appreciated in his own land.
I give kudos to the Nigerian police because they are vibrant, dogged and selfless when it comes to the discharge of their duties. I intend to limit this article to Imo State where the police has been exemplary. This is why the inhabitants of Imo State can sleep with both eyes closed. Though, one cannot deny that once in a while, the dreaded monster, called crime, does not come to the surface. But the police have in most cases, if not in all of them, come out stronger in combating them. Some people don't really understand what crime means or the proper yardsticks for measuring crime rates. They go on to measure the crimes of a society or geographical entity wrongly.

One of the problems Imo State police command is facing is simply the people. Yes! It is a general aphorism that "Police is your friend." But my observations and investigations have shown that most Imolites still see policemen as their worst enemies. This perception of the police has cut short the full support and rapport that the police ought to be enjoying. Yet it is still this same people that the police seeks to protect. One is left to wonder how these easy it is to protect someone who runs away at the sight of your uniform. It is funny and also morally wrong that a small child in Imo State, and generally in Nigeria, at the mention of “Ndi police”, begins to run. The child runs inside the house for fear of being caught by the police.
Some parents have not helped matters too. Some have trained their kids to see policemen as people who shoot at the slightest provocation. These kids grow up with that mentality and thus develop chronic hatred for innocent policemen.
The truncated relationship between the public and the police can also be seen as being responsible for the poor information the police gets from the public. Policing thrives with information and when starved of it, crime rates go up. How many Imolites can muster the courage, and temerity being their constitutional right, to report to someone with a suspected criminal tendency to the police? Even if few persons do it, how many among the few can stand their grounds against the said criminal in a court of law?

I asked a friend of mine, whose stock-in-trade is criticizing the Imo State police command, to give me the correct figure of armed robbers, kidnappers and those perpetuating crimes in the state. He looked at me, aghast, and asked me about how on earth did I expect him to know that. Then I simply told him to always learn how to keep his mouth shut. And to do so especially whenever he has nothing meaningful to say or ask. The police are not super-humans. Catch a kidnapper every day and you will still hear that someone has been kidnapped. These hoodlums multiply at a terrific pace. So it is not a matter of the police not fighting crimes. Rather, it is just that those committing these crimes are far too many to handle. That is why we should channel our ink towards encouraging and supporting the police to help them to fare better in combating and catching the countless criminals in our society.

Again, a top policeman in the state, who got hold of the open letter I once wrote to the state commissioner of police, confided in me that the legal system in the country, which also covers the state, is not helping the police force. Especially as expected. He said that instead of some lawyers to work in synergy with the police, they deviate and undermine that expectation by way of intimidating the Force.  As though the police were under them. The embittered policeman, recounted how he with his team had arrested an alleged phone snatcher at Douglas road Owerri, only for the parents to invite a relation, who happened to be a lawyer, to come to the boy's rescue.
Expectedly, in their usual way of claiming human right activists, even when some of them don't know what activism really entails, the lawyer came and did his “thing” and the rest became history. What about the judges who allegedly take bribes to pronounce an accused person innocent? Our legal system and practitioners have bastardized the ethics that were supposed to be guiding them in the discharge of their duties. They do this while chasing money, and leaving the police to be at the receiving end of their selfish and unpatriotic actions.

Another factor that has reduced the effectiveness of the Nigeria Police is unemployment. Take Imo State as an example where we have no fewer than five tertiary institutions, with each graduating over one thousand five hundred students annually. What preparations has the governments both state and federal made to ensure that these young graduates channel their knowledge and God given talents into positive uses? With over five thousand graduates seeking jobs in Imo state alone, what is the possibility of one thousand graduates getting jobs in a year after graduation? Will the unfortunate ones fold their arms and watch hunger lead them to their ancestors? Your answer is as good as mine. 'Man must survive' is a popular saying amongst youths. The government has failed, woefully, by not providing jobs for the teeming unemployed youths. These are the ones who now see crime as a means to an end, and when they unleash mayhem on the public, the government goes forth to accuse the police of ineffectiveness. Have they forgotten that prevention is better than cure? There would not have been much arrests if these youths had been gainfully employed. Over 40% of Keke riders are graduates. Imagine if they had waited for the government to provide jobs for them. They would, by now, have become professional armed robbers or kidnappers. Yet, Keke sells for outrageous Four hundred thousand naira. That is what is required to purchase a tricycle today. How many unemployed youths can afford it?
Finally, one of the major reasons the police command has failed to live up to people's expectations, is traceable to the crude way of policing. This is the painful practice in the country and it can be narrowed down to my dear state. Last Christmas, a friend of mine, who lives in Hamburg, Germany, told me of how he was arrested for over-speeding while driving on the streets of the city. He told me that in Hamburg, one could hardly find a policeman along the streets, but once a crime is committed by anyone, policemen would surface and take charge of the situation in a matter of minutes. It would even seem like seconds, he told me. This gave me a surprise due to what is obtainable here in Nigeria. He also told me about how he once exceeded the required speed limit, on a particular road in Germany, because he thought that no one was watching, but immediately he turned right to go to his house, some policemen stopped him. There and then, he was fined for over-speeding.
Now my readers may be wondering how, on earth, the policemen got to know about my friend' over-speeding even when they were not on the streets. The answer is simple; CCTV Cameras. Yes, cameras are planted along the streets of Hamburg to monitor everything going on, with or without the presence of the police. Personally, if I had the opportunity to go to Hamburg, I would have, immediately, dropped the pen for the barton. This is a place where the police job is noble. Not the situation where a policeman will stand for more than four hours in the excruciating sun while manning the check points.

My point is simple. Government should help in ensuring that policing the country is “modernized”. It should be equipped with sophisticated gadgets and computers. This would aid in tracking criminals faster, all over the country. It pains me to hear that some top policemen, in Nigeria, go to other countries on invitation, to teach them the rudiments of policing. The Imo State Police Public Relations Officer, Mr. Andrew Nwerem, is acclaimed to have travelled far and wide on such missions of educating other countries' policemen, where he taught better policing strategies, at international conferences and bringing the best out of the police work. These trips abroad have won him international awards and recognitions.
We cannot deny the fact that we have able Police officers and men in the police force but the poor environment is one major monster that is giving the police a bad name. That notwithstanding, the Nigerian police has done tremendously well with the little at their disposal. Most guns belonging to armed robbers happen to be more sophisticated than those of the Force. Without displaying any sense of selfishness, I will not for anything in the world allow my father to fight a man wielding a knife with a mere stick. The police are humans and it sounds crazy, if not stupid, for anyone to think they should defend the society at the risk of losing their own lives. I do not encourage laxity on their part but I am of the opinion that the government has neglected the police force. We have left the Police in comatose and, as such, people should start heaping blames on the government rather than the police. This is because there is no head without the neck.

Truth is bitter, as bitter as honey is sweet.
Posted by IfeanyiCy Njoku
Labels: Opinion