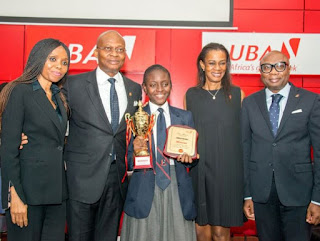 It was an all-female affair as 15-year old Samuella Sam-Orlu of British Nigerian Academy, Abuja, emerged the overall winner of the 2017 edition of the UBA Foundation National Essay Competition, winning an educational grant of N1,000,000.00 to study in any African university of her choice, as well as a laptop.

Samuella clinched the first position at the grand finale, which was held in Lagos on Monday, ahead of 11 other finalists selected from over 1,000 entries received by the UBA Foundation from students of senior secondary schools across Nigeria.


A visibly elated Samuella, who was escorted by her guardian, Mrs. Jacqueline Uzoadibe said that winning the competition would propel her to do more in attaining her dreams of becoming a Medical Director.

The second prize was bagged by Deborah Chinwendu Innocent aged 15 of Enal International Schools Abuja, who won N750,000 educational grant and a laptop while the third prize went to Yahofon Ettah Essien of Nigerian Christian Institute Akwa Ibom State, coveting a N500,000 educational grant and a laptop. The other 9 finalists were given laptops. All 12 finalists also went home with certificates.
Posted by Cheta Igbokwe
Labels: academic