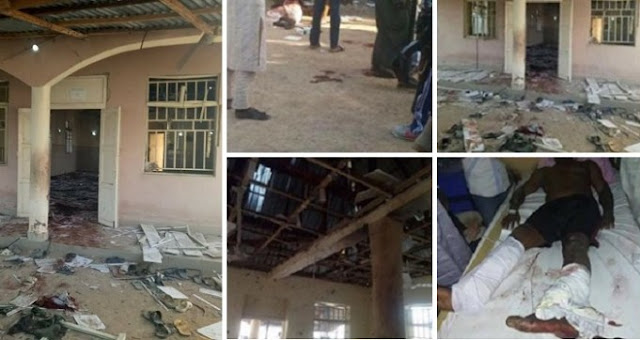 Over thirty people have been killed earlier today in a Mosque in Mubi, Adamawa State. They were attacked by a teenage suicide boy.

Reports have it that the suicide attack occurred around 5:20am local time, at Kunu Araha, a suburb in Mubi North, triggered by a yet to be identified teenage boy who set off the suicide vest he was wearing.


Othman Abubakar, the police spokesman of Adamawa State police command, who confirmed the incident, said over 30 persons lost their lives in the dawn mosque attack.
He noted that several other persons wounded in the attacks are receiving medical attention at various medical hospitals in Mubi.


“We were made to understand that there was a bomb blast at a mosque in Mubi and over 30 lives were lost. A boy about 17-year-old wearing a suicide vest entered the mosque along with other worshippers. Immediately after the prayers, he detonated the bomb. Many of the wounded are receiving treatment at various hospitals in Mubi North where the attacks occurred around Kunu Araha area.”


Here are more pictures of the attack: