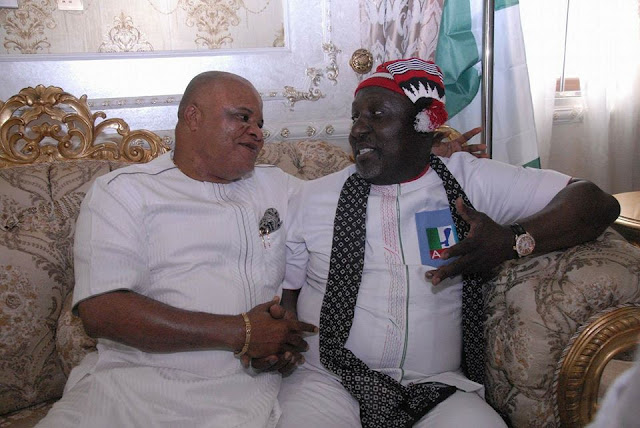 The political rift between  the Imo state Governor Rochas Okorocha and an APC party leader  Senator Ifeanyi  Araraume has reached another dimension as the governor indirectly accused the party chieftain of lobbying  his appointees with ritual oath-taking.
In apparently reference to the Isiebu born senator, the governor through his SSA media, Mr. Sam Onwuemeodo accussed some “politicians in the state especially those with governorship ambition against administering oath on Imo people who are either members or officials of their political parties.”

“The governor regretted that the aspirant in question has become synonymous with oath administration on innocent Imo Citizens and contended that since this idea of subjecting party members and officers to oath taking has never been able to help the particular politician in the past, there is therefore no guarantee that such diabolitical act would help him this time.” The statement enphaized.

He said the “the governor decided to issue this warning vis-à-vis advice following the unfortunate reports from certain party officers that a governorship aspirant from one of the political zones in the  state had subjected them to oath taking and that, while most of them refused to take the oath, few of them allowed themselves to be cajoled into taking such fetish action.” The Governor warned.

Ifeanyicy.com recalls that there are ongoing fight between the governor and the former senator
On who to control the APC party structure in the state as 2019 beckons.

The governor who is hell-bent in installing his son-in-law and his present chief of staff, Mr. Uche Nwosu and the Former Senator also in serious readiness for the state coveted office are not giving anything  to chances as the political season draws closer by the day.

Governor Rochas Okorocha fired the first shot when he withdrew all political appointees perceived to be of the Araraume camp and replaced them with Araraume’s political rivals to put the former senator once dubbed ‘The Game Changer’ in check and the latest being making an indirect reference to him of seducing his political appointees with huge monetary offers and at the same time subjecting them to fetish oath-taking.

Even though the former Senator’s name were never mentioned in the said press statement but political watchers in the already knew whom the governor was referring to.

As 2019 political drama unfolds, more political shots are expected to be fired from all cylinders by the political actors.
Posted by BizzyAmb
Labels: Politics