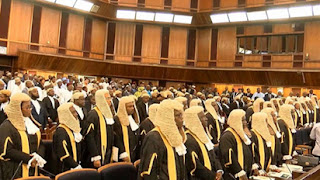 The National Judicial Council, NJC, yesterday, denied allegation that the South East region of the country was sidelined in an ongoing process that will lead to elevation of 14 Judges to the Court of Appeal bench.

The Council, in a statement by its Director of Information, Mr. Soji Oye, said it considered merit and geographical spread in the appointment of Judicial Officers to the Court of Appeal. It maintained that in considering appointment for 14 vacancies currently existing in the appellate court bench and to ensure that each zone is adequately represented, states that already have three serving Justices were excluded.

“The states not considered are: Anambra, Bauchi, Borno, Cross-River, Ebonyi, Edo, Ekiti, Gombe, Imo, Kogi, Kwara and Oyo. “States like Adamawa, Kebbi and Sokoto have zero representation which informed the need to include them in the current exercise. “Appointments are made to the Court based on the elevation of Appeal Court Justices to the Supreme Court, retirement at the age of 70 years, or death. Such vacancies are filled with judicial officers from the zone of the Judge who died, retired or elevated. “It is therefore unfair for the online media to claim that the National Judicial Council recommended no candidate from the South-East which currently has 13 Justices at the Court of Appeal. “Journalists are pleased advised to always balance their report to avoid litigation,” the statement read.
Posted by Unknown
Labels: Politics