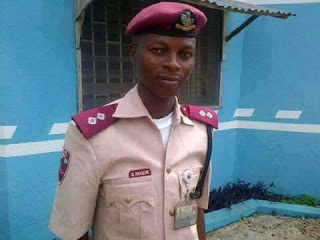 An officer with the Federal Road Safety Corps (FRSC) in Ondo State was killed in a road accident in Akure over the weekend, SaharaReporters has learned.

Sehinde Abolusoro was crushed to death after a speeding driver lost control of his vehicle.

The 36-year-old officer was killed on the busy Ilesa-Akure Express Road while on duty performing his lawful job.

SaharaReporters gathered that the road safety officer was crushed to death after checking and passing some vehicles.

Our correspondent exclusively gathered that the deceased was the Deputy Route Commander (DRC) in the Ondo Sector Command.

A witness who confirmed this on Sunday said the FRSC officer was crushed by the roadside and later lost his breath.

"The driver, in full speed, was trying to avoid a big truck and in the process veered off his lane. In that same process, he hit the officer that was standing almost by the roadside to control other incoming vehicles," the witness said.

Dare Abolosoro, one of the brothers of the late FRSC officer, also confirmed the incident to our correspondent on the phone.

"This is a calamity and the deceased left behind children who are still very much younger and need a caring hand.

"It was a sad incident but we just have to take solace in God because He knows more than us at this trying time," Mr. Abolosoro said.

He disclosed that the families of the late officer had been thrown into mourning with friends and colleagues paying visits to show their respect.

Contacts made to the official telephone line of the Ondo State Sector Command of the Federal Roads Safety Corps were not connecting on Sunday night.

However, a junior officer in the command confirmed the incident but said he was yet to get the details about the story.

"It was true that a driver killed one of our officers, but I won't have the details until I resume for work tomorrow [Monday]," he said.

Our correspondent learned that the driver has been arrested by the police in the state over the sad incident.

The driver, identified as Sola Olagunju, is currently being detained by the men of the Ondo State Police Command.

Mr. Joseph said the police have begun an investigation on the case with a view to arraign the driver in court.

He disclosed that the remains of the late FRSC officer have been deposited at the hospital's morgue.
Posted by Unknown
Labels: Travel