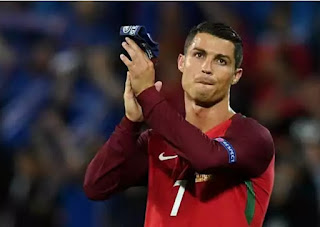 Cristiano Ronaldo was surprisingly left out of the Portugal squad announced on Friday by coach Fernando Santos, who suggested it was merely to give his superstar a break.

Santos denied the omission was due to the four-time Ballon d’Or winner’s relatively meagre goal-scoring start to the Spanish league season.

Ronaldo has scored only one goal in six La Liga games for Real Madrid, although he has been on fire in Europe with six goals in four matches.

“Do you think that would be a reason to leave out Ronaldo? No, impossible,” Santos said of the former Manchester United star’s league form.

Portugal face Saudi Arabia and the United States in a pair of low-key friendlies on November 10 and 14.

Ronaldo is likely being merely rested, as he was for Portugal’s final Confederations Cup match in Russia in June, a meaningless third-place play-off victory over Mexico.

“Some aren’t there simply to rest while others are injured,” explained Santos.
Posted by Cheta Igbokwe
Labels: Sports