Robinho Sentenced To 9 Years In Prison Over Sexual Assault 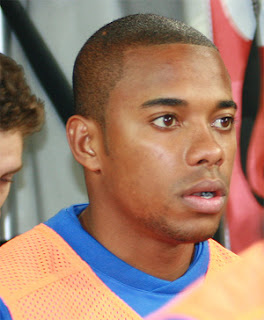 Brazilian footballer Robinho has been sentenced to nine years in prison for taking part in the gang rape of a woman in Milan in 2013.

An Italian court ruled the 33-year-old and five other Brazilians assaulted the Albanian woman, who was 22, after plying her with alcohol in a nightclub.

The forward, who left AC Milan in 2015 after five years, was not in court but pleaded not guilty via his lawyer.
The sentence will be put on hold until the appeals process is completed.

Robinho, capped 100 times by his country, spent two years at Manchester City and currently plays for Atletico Mineiro in Brazil.

A post on Robinho’s Instagram page said he had “already defended himself against the accusations, affirming that he did not participate in the episode” and that “all legal measures are being taken”.
Posted by Unknown
Labels: Sports