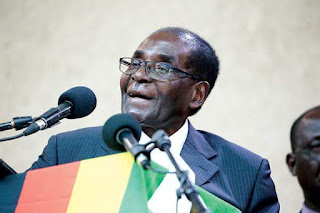 Embattled Zimbabwean president Robert Mugabe was on Sunday deposed as the leader of ruling Zanu-PF party, and replaced by his former deputy Emmerson Mnangagwa.

His wife Grace Mugabe was also expelled from the party and banned for life.
Mugabe on Sunday met with the army commander who put him under house arrest, while the ruling party opened an emergency meeting to recall the world's oldest head of state as its leader.

Zimbabwe's ruling party Central Committee members stood and cheered at the decision.
Minister of Home Affairs Obert Mpofu said that they met with "a heavy heart" because Mugabe, 93, had served the country and contributed "many memorable achievements."

Mugabe's hold on power was broken this week when the military took over in a dispute over who would succeed him.
"President Robert Mugabe will meet the command element of the Zimbabwe Defence Forces tomorrow," state television announced on Saturday.

The two sides first met for talks on Thursday, smiling in photographs that attempted to present a dignified image of the tense process of negotiating Mugabe's departure.

In scenes of public euphoria not seen since independence in 1980, huge crowds marched and sang their way through Harare and other cities on Saturday, demanding the end of Mugabe's authoritarian rule.

The marches came after a historic week in which the military seized power and put Mugabe under house arrest in response to his sacking of Mnangagwa, a perceived rival of Mugabe's powerful 52-year-old wife Grace who had increasingly voiced her ambition to succeed her spouse.
Posted by Unknown
Labels: Foreign affairs