Robert Mugabe On Hunger Strike; Refuses To Eat For 2 Days; Vows To Die 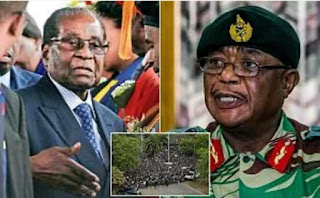 Zimbabwe President Robert Mugabe is refusing to eat in protest against his confinement, one of his close family members has told MailOnline.

The frail 93-year-old has not accepted any food since Saturday, the source revealed, as he continues to be held under house arrest at his Blue Roof mansion.

Mugabe's nephew Patrick Zhuwao said on Saturday that Mr Mugabe was 'willing to die for what is correct'.

A Zanu-PF minister confirmed to MailOnline that Mr Mugabe is also refusing to speak as part of his days-long protest.
'The old man has been trying a lot of various tricks since last night,' the minister, who asked not to be named, said. 'Hunger strikes, making threats and refusing to talk.'

Zimbabwe's ruling ZANU-PF party held a special meeting on its central committee on Sunday to remove Mugabe as its leader and kick him out, Chris Mutsvangwa, the head of the powerful liberation war veterans said.

Also on Sunday, Mugabe is set to discuss his expected exit with army commander Constantino Chiwenga, who put him under the house arrest that he is protesting with a hunger strike.

Mutsvangwa, who has led the campaign to oust Zimbabwe's ruler of the last 37 years, said Zanu-PF's meeting would also reinstate ousted vice-president Emmerson Mnangagwa and remove Mugabe's wife, Grace, as head of the Zanu-PF Women's League.

'We are going all the way,' Mutsvangwa said as he headed into the meeting, adding that Mugabe should just resign and leave the country. 'He's trying to bargain for a dignified exit but he should just smell the coffee and gap it.'

Zanu-PF Central Committee members stood and cheered as the official chairing the emergency meeting announced plans to remove Mugabe from his leadership post on Sunday.

Obert Mpofu told the committee that they were meeting with 'a heavy heart' because Mugabe had served the country and contributed 'many memorable achievements'.

But Mpofu said in his opening remarks that Mugabe's wife 'and close associates have taken advantage of his frail condition' to loot national resources. The party will also discuss reinstating recently fired Vice President Emmerson Mnangagwa.

The army threatened to let a mob lynch the dictator if he didn't stand down, MailOnline revealed on Saturday. Now Mugabe has responded by rejecting all food.

'If he dies under military custody, even by natural causes, then the army will be held responsible by the international community,' the family member, who asked not to be named, said. 'That is how the president is trying to put pressure on the army.'

The family member also said that Grace Mugabe was by her husband's side at the Blue Roof mansion yesterday, and is thought to still be there today.

It comes as the Zanu-PF central committee met at the party HQ in central Harare to begin the formal process for expelling Mr Mugabe from his own party.

The meeting follows rumours that the dictator had fled the country after hundreds of thousands took to the streets to protest against his rule.

Video footage from protests obtained exclusively by MailOnline showed angry crowds tearing down a huge billboard of Mugabe outside the headquarters of the ruling Zanu-PF party in central Harare.
The footage shows dramatic scenes that would have been unthinkable just a few days ago.

While Mugabe could be removed as party leader, his title as president of Zimbabwe would still remain. He can only be removed from his presidency through resignation or impeachment, launched through a constitutional process.

'What is left is just the technical detail of how he's going to leave,' former Zimbabwean finance minister Tendai Biti told Sky News. 'Even if Zanu-PF does remove him - if they do have the power, which i doubt - that doesn't amount to removing him as president of the country.
'There has to be formal processes - either his own resignation or an impeachment.'

The talks with army commander Constantino Chiwenga are the second round of negotiations on an exit with a veneer of dignity as the military tries to avoid accusations of a coup.

Senior figures in Zanu-PF gathered at their headquarters in the capital, Harare, on Sunday ahead of an emergency meeting to discuss calls to expel longtime President Robert Mugabe as party leader.

Soldiers checked vehicles at the gate and a military vehicle parked inside the grounds as leaders converged in the area. The military has Mugabe under house arrest after moving in last week, angered by Mugabe's firing of his longtime deputy.

Impeaching the president is another step when Parliament resumes Tuesday, and lawmakers will “definitely” put the process in motion, the main opposition’s parliamentary chief whip told The Associated Press.

Zanu-PF moved forward with the process of formally expelling Mr Mugabe from the party after all ten of Zimbabwe's provinces passed no-confidence motions against him on Friday.

Innocent Gonese with the MDC-T party said they had been in discussions with the ruling ZANU-PF party to act jointly.
Gonese said of the talks: 'If Mugabe is not gone by Tuesday, then as sure as the sun rises from the east, impeachment process will kick in.'

The MDC-T has unsuccessfully tried to impeach Mugabe in the past, but now the ruling party has turned against him.
The youth league of Zanu-PF called for Mugabe to resign and take a rest as an 'elder statesman', while his wife, Grace, should be expelled from the party 'forever.'
Youth league leader Yeukai Simbanegavi praises the military for moving against what she describes as a group of 'criminals' led by Grace Mugabe.

'It is unfortunate that the president allowed her to usurp executive authority from him, thereby destroying both the party and the government,' Simbanegavi said at ruling party headquarters on Sunday.

The army has also brought intense pressure to bear upon the 93-year-old, threatening to stand aside and allow him to be lynched if he does not stand down soon, a senior politician told MailOnline.

Mutsvangwa that that he is concerned that the military could end up opening fire to protect Mugabe from protesters. He says there will be more demonstrations like the massive one Saturday if Mugabe's negotiations with the military on his departure from power don't end soon.
Posted by Unknown
Labels: Foreign affairs