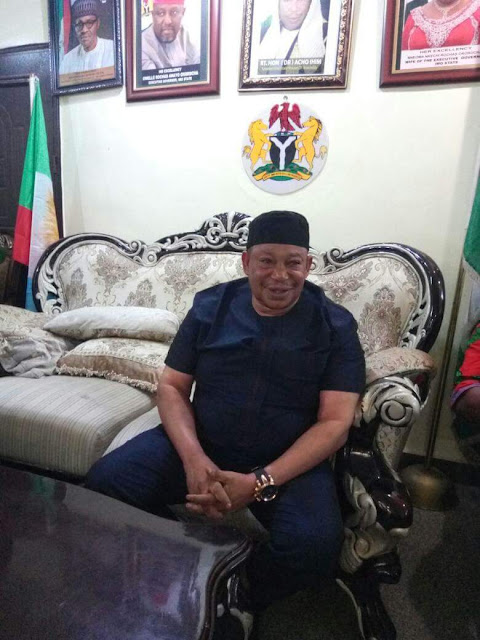 While the major focus of APC members and other politically conscious Imo people are centered on one direction concerning the race for who succeeds the governor Owelle Rochas Okorocha, in 2019, it can be revealed that the Imo State House of Assembly Speaker, Rt Hon Acho Ihim, is trying to play the jocker in the pack and hopeful of getting the blessing of the governor at the end.
By 2019, Okorocha’s second tenure will elapse setting the stage for the struggle over who becomes the number one citizen of the State. Speculations have been rife that the governor has intentions to back his Chief of Staff who is also the son- in-law, to succeed him in office.
Prominent members of the APC have raised the alarm alleging that Okorocha’s body language is tilting towards Nwosu for the plum throne. The allegation has caused serious ruckus thereby polarizing interest in the rank and file of Imo APC.
But while the said intention of the governor is somewhat attracting political enemies to him, the Speaker of the House is working behind the scene to get favoured in the “anointment” of successor which Okorocha is yet to make.
Ihim, a former council boss of Okigwe LGA before emergence as the lawmaker representing the state constituency is using subtle means to win the heart of the governor to be endorsed for the race.
Apart from Okorocha naming him among those likely to be his successor in the public, the Speaker is working assiduously towards meriting the APC governorship ticket in 2019.
Trumpeta learnt that Ihim’s believe that he could be Okorocha’s anointed one emanates from an earlier revelation given to him by a powerful man of God who allegedly prophesied that the two time House of Assembly member will be the next governor of Imo State after the tenure of the incumbent. Though, Ihim is a member of the Assemblies of God church, one of the Pentecostal Churches, but the quest to become the anointed one to carry APC governorship flag in 2019 is taking him to other churches where “powerful” men of God preside. The powerful cleric who first made the prophecy is said to be based in Lagos. The prophet cum preacher who performs miracle showed in a TV series first gave Ihim the signal of becoming “His Excellency” in the next two years. Aside from the earlier prophecy, the Speaker also attends other notable church of God in recent times to solidify the spiritual angle of the guber bid.
Okorocha, this newspaper further learnt has not also hidden intentions to include Ihim as one of his favourities. In most meetings and function both key political play makers meet, Okorocha has not failed to inform those around him that Ihim can adequately fit in to become his successor.
Another aspect that has blossomed Ihim’s search for spiritual support to the governorship ambition is the Okigwe zone question where Senator Ifeanyi Araraume is posing a threat to Okorocha’s desire to control affairs of APC in the build up to 2019 election. Only recently, Okigwe zone political leaders met where Ihim was chosen and made the apex leader ahead the likes of Senator Araraume and the current member of the Upper Chamber representing the zone in Abuja, Ben Uwajumogu.
The Okigwe apex leadership position, it was learnt, is a stepping stone into enthroning him, not only as a main challenger to Araraume, but also a strategic candidate from Okigwe zone for the throne, if there are resolutions that 2019 governorship position belongs to Imo North Senatorial District.
The non combative nature of the Imo Assembly towards checking the excess of the executive arm can also be attributed to the desire of Ihim to become governor. In a bid not to harm the mutual respect and understanding between him and Okorocha, the State lawmakers are yet to confront Okorocha on any issue related to governance. Instead, the State Governor receives continuous kudos and commendations from the lawmakers with a caveat from Ihim that Okorocha deserves only an impeachment for “over working for Imolites in delivering democracy dividends”.
In line with this disposition, the Speaker has taken the matter to God and has become a candidate for many spiritually filled church programs within and outside the State.
Posted by IfeanyiCy Njoku
Labels: Politics