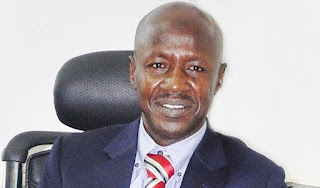 The presidency has opened discussions with the Senate leadership over the refusal of the upper chamber to confirm the head of the country’s anti-graft agency.

The Senate twice refused to confirm Ibrahim Magu as the chairman of the Economic and Financial Crimes Commission (EFCC).

But the government has kept Magu in office in acting capacity for over one year now.
This has, however, drawn the ire of the Senate which has stood down nearly all nomination requests from the Presidency until Magu is removed.

Sources disclosed yesterday that the Presidency has reached out to the Senate in order to find a middle ground upon which the dispute could be resolved.

A meeting to that effect was held on Monday with both parties, our sources said.
Presidency and Senate sources said, at the moment, confirmation of close to 50 nominees of the president is pending.

Contacted, Senior Special Assistant to the President on National Assembly (Senate),
Senator Ita Enang confirmed that the presidency has resumed talk with the Senate.

“We are not resting on our oars; we are conducting the best and highest level of diplomacy. We have started talking again; we have changed the tone of our speaking. We are arriving at something like a middle ground that would be satisfactory to all parties.

“So long that these appointments stand unconfirmed, foreign investment, funding from foreign partners and governance are being affected. We are not attacking, we are engaging and I believe in the next few days, the result will be evidenced and we will come out of it,” he said.

Asked whether the executive has agreed to sack Magu, Enang said: “We are working with them and we are arriving at some solutions “.

When our correspondent asked him to list the number of pending confirmation, he said: “We have nominees for NERC, CBN, Pension Commission, NDIC, NDDC among others.”

Again when asked on whether the executive has agreed to implement the resolution on Magu, he repeated: “We are arriving at some solutions “.

The confirmation followed the consideration of the report of Senate committee of INEC on the screening chaired by Senator Suleiman Nazif (APC,Bauchi). The Senate approved the recommendation of the committee rejecting Ahmad Bello Mahmud ( Zamfara).

The confirmation came five months after 12 other nominees (RECs) had been confirmed. Our correspondent reports that Senator Tijjani Kaura (APC, Zamfara) and Senator Kabiru Marafa clashed over the Zamfara nominee.

While Marafa was in favour of the confirmation of the nominee, Kaura objected to it on the grounds that the (nominee) was not from Zamfara state. He said the nominee is from Sokoto state.
Posted by Unknown
Labels: Politics