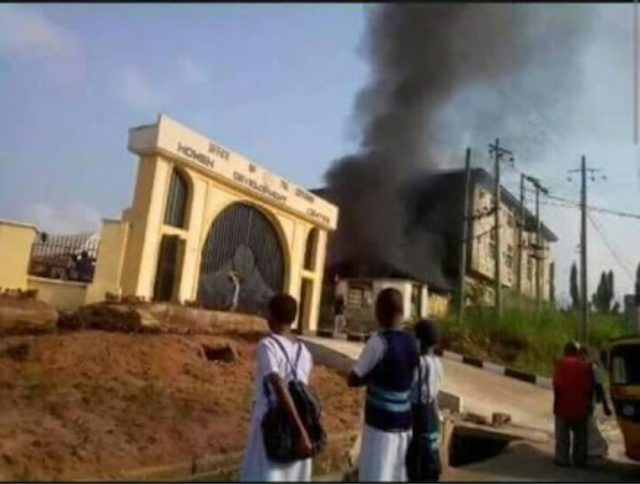 There was panic at the Okigwe Road axis of Owerri , Imo State, on Tuesday morning as fire wrecked havoc on Stone Castle Hotel.

The incident happened less than 12 hours after an explosion from a gas plant at Okpokiri petroleum station , which is a stone’s throw from the hotel, killed four persons and with several others injured .

When our correspondent arrived at the scene of the latest fire incident , policemen from the Orji Police Division , led by the Divisional Police Officer , Ude Umanta , fire fighters, the management of the hotel and sympathisers were already on ground.

Frantic efforts were made to ensure that the fire incident did not affect other buildings in the area, including the Imo Girls’ College, Owerri .

Our correspondent learnt that the incident , which occurred around 8 am, left guests scampering in all directions .

“Guests abandoned their rooms and ran outside . Nobody expected it . There was no sign that danger was lurking and it happened suddenly,” an eyewitness said .

The quick response from the men of the Imo State Fire Service helped to quench the inferno, which reportedly started from the power house .

Speaking to our correspondent at the scene of the incident , the officer in charge of fire prevention department of the state fire service , Francis Ekeocha , said property worth millions of Naira was lost to the fire .

Ekeocha, who said the cause of the fire incident had yet to be ascertained, confirmed that it started from the power house .

“We responded to a distress call and quenched the fire . The actual cause of the outbreak had yet to be ascertained, but it started from the power house .

The proprietor of the hotel , Dennis Okoroafor , told our correspondent that the hotel would shut down immediately.

“I don’t know the actual cause of the outbreak because I was woke from sleep.

“We have lost millions to the fire . We are shutting down immediately and it would last for days ,” the proprietor said .

He said that contrary to a rumour , no guest was hurt , nor was anyone taken to the hospital as a result of the fire .

“Apart from the property we lost, which are worth millions, no human casualty was recorded. No guest was affected .

“We are shutting down immediately to enable us bounce back better , ” Okoroafor said.