Ondo Govt. Hands Off Payment Of WAEC Exam For Students 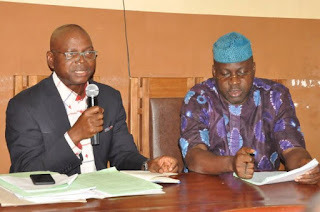 As from May 2018, students sitting for the West African Examination Council, WAEC exams across public institutions in Ondo state will have to pay their examination fees themselves, as the state government has stopped the payment of the fees for the students.

The Commissioner for Education, Science, and Technology, Mr. Femi Agagu made this known while briefing newsmen at the end of the State Executive Council meeting held in Akure on Wednesday.

Agagu who addressed the press alongside the Information Commissioner, Yemi Olowolabi also said the members of the Council took time to study the recommendations of the Education Summit organised by the state government last year before arriving at its decision.

On the issue of free education, the Education Commissioner said the Council resolved that government will continue to fund education at the primary and post-primary levels while also setting up an Education Trust Fund that would help to mobilise funds for the education sector in the state.

Citizens of the state Mr. Agagu said, will be encouraged to pay N1,000 into the trust fund which will be managed by a committee comprising prominent sons and daughters of Ondo State.

In the same vein, the state government also announced the appointment of Prince Joel Oluwafemi Adeluwoye as the new Asuada of Isuada in Owo Local Government Area of the state.
Posted by Unknown
Labels: Education