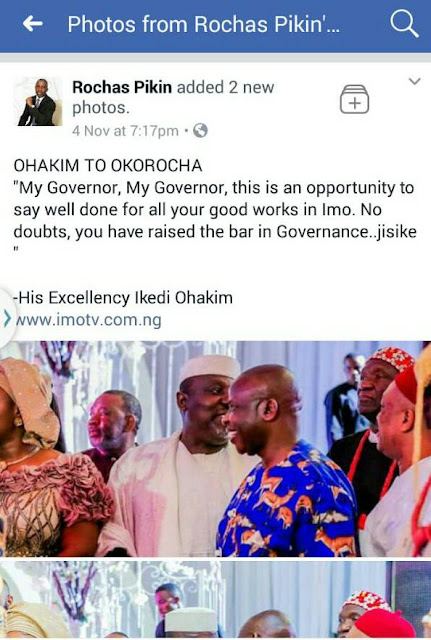 The immediate past  governor of Imo state, His Excellency, Dr. Ikedi Ohakim has come hard on Governor Rochas Okorocha describing him as unreliable governor who discards executive promises like used napkins, denying ever praising him as insinuated by widely circulated Facebook post made by the governor’s social media aide known as Rochas Pikin.

Debunking the post  in its entirety, the former governor wrote: “There is absolutely no iota of truth in the post order than a childish excitement of seeing me in a handshake with his benefactor and a leader  who has impoverished the people and failed  comprehensively in all departments of leadership and development.

Should I praise Okorocha because civil servants now receive half of their salaries instead of 100%. Should I praise the government for owing pensioners for over 30 months and recently issuing dud cheques to them? What exactly are those good works for which I was supposed to have be showing praises on "My Governor, My Governor"?

He continued:  “Should I praise him for the quality of his infrastructure; provision of clean drinking water in every kitchen; compliance with due process in contract administration and leadership; should I praise is for the functional healthcare facilities in the state or the cleanest environment south of Nigeria. I can go on and on.
The fact is that no right thinking Nigeria can praise Rochas and his pikin.”

In the post monitored by Ifeanyicy.com, Dr. Ikedi Ohakim lampooned Gov. Rochas Okorocha as a man who can never earn his praises haven subjected the good people of Imo state to untold hardship and wondered why he should praise such a man as unreliable as the governor.

He urged the good people of Imo state and Nigeria at large to discard such post which he described as “malicious and defamatory statement” against his person.
Posted by BizzyAmb
Labels: Politics