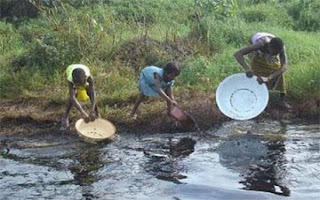 The spill which occurred on a pipeline linking the Evwerni Well 8 & 9, was reportedly noticed by residents of Egbo quarters of the community on October 29.

A representative of the quarter, Odion Andrew Umukoro, told newsmen that they woke up on the said day to discover that a section of the pipeline, which connects a well head in the area, was gushing crude oil. Umukoro explained that the facility which was formerly owned by Shell Petroleum Development Company, SPDC, has been sold to another multinational oil company in the area.

He said: “Suspecting equipment failure, we contacted the company and they promised to do the needful but till date they are yet to and the spill is doing more damage to other adjourning farmlands in the area.” On the extent of damage by the spill, another community leader, Boggie Ogbe said:

“At the moment, the livelihood of the community which is fishing and farming is in jeopardy because the spill which is on the stream in the community, has damaged aquatic life and is fast spreading to other areas.”