Ndidi awarded man if the match Leicester and stoke draw 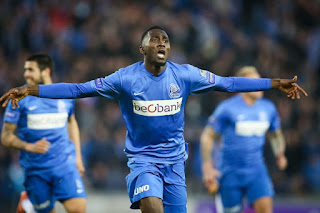 Leicester City were held to a 2-2 draw by Stoke City in a close Premier League encounter at the Bet365 Stadium on Saturday afternoon, with Wilfred Ndidi grabbing an assist and subsequently named the man of the match.

The Foxes had been enjoying something of a renaissance since they cut their ties with Craig Shakespeare and appointed Claude Puel.

And they wasted little time to get going, with Harry Maguire doing well to knock down a corner for Vincente Iborra to latch onto and fire home.

Stoke rallied round to get back into the game six minutes to the break, Eric Maxim-ChoupoMoting sliding Xerdan Shaqiri through to race in and finish with aplomb.

On resumption of the second period, Ndidi took prominent stage in the game, controlling and bossing play in the middle of the park and on the 60th minute, the 20-year old did incredibly well to pick out Algerian Riyad Mahrez who skipped around Eric Pieters to beat Jack Butland in the Stoke goal.

But Peter Crouch’s header pegged back Leicester, the Englishman’s bullet header proving too much for Schmeichel to keep out.

In the 88th minute, Iheanacho, who came on for Shinji Okazaki 12 minutes into the second half got into a great position in the box to put away another goal which looked to be the winner for Leicester but it was unfortunately ruled out for offside, forcing the King Power outfit to eventually settle for a share of the spoils.

Leicester continue their surge up the league table and are placed 10th with 13 points now by virtue of the draw while Stoke are in 14th, a point less than their opponent.
Posted by Cheta Igbokwe
Labels: Sports