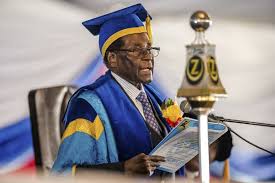 Zimbawean President, Robert Mugabe has just made his first public appearance after the house arrest. The 93-year-old President opened a graduation ceremony at Zimbabwe Open University in Harare.
He wore blue and yellow academic robes and a mortar board hat and appeared to fall asleep in his chair as his eyes closed and his head lolled.

Recall that Mugabe led the country’s liberation struggle and has dominated its politics since independence in 1980. He said he is still in charge but a senior member of the ZANU-PF ruling party said it wanted him gone. 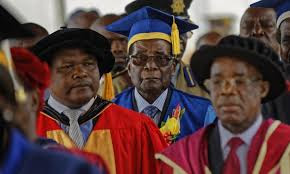 “If he becomes stubborn, we will arrange for him to be fired on Sunday,” the source said. “When that is done, it’s impeachment on Tuesday.”