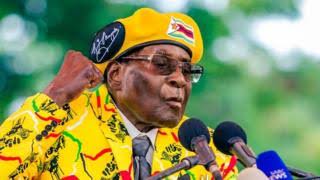 93-year-old Zimbabwe President, Robert Mugabe is refusing to eat in protest against his confinement, one of his close family members revealed.

Further research claims that the frail 93-year-old has not accepted any food since Saturday.

Mugabe’s nephew Patrick Zhuwao said on Saturday that Mr Mugabe was ‘willing to die for what is correct’.

A Zanu-PF minister confirmed to MailOnline that Mr Mugabe is also refusing to speak as part of his days-long protest.

‘The old man has been trying a lot of various tricks since last night,’ the minister, who asked not to be named, said. ‘Hunger strikes, making threats and refusing to talk.’
Posted by Cheta Igbokwe