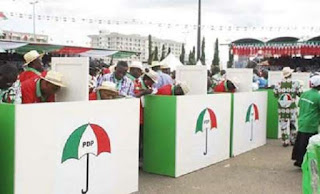 The Adamawa chapter of the People’s Democratic Party (PDP) on Saturday conducted its State Congress to elect new executive.


The News Agency of Nigeria (NAN) reports that Mr Tahir Shehu emerged the new chairman, while Alhaji Abdullahi Prambe emerged the Secretary.
Others elected are Alhaji Hamza Bello as Organising Secretary, Mrs Altine Inuwa as Women Leader and Mr Sam Zadock as the Publicity Secretary.
Speaking after taking the oath of office, Shehu thanked the party delegates for electing him and extended the hand of fellowship to all members.
He promised a renewed move to reclaim the state and federal governments for the PDP.

“Today we have conducted our state congress and you have graciously elected me and my colleagues to lead the party for the next four years.
“We wish to assure you that we shall not betray your trust. Be rest assured that we shall abide by the constitution of our great party and also allow for level playing ground for every bona fide member,” Shehu said.
In his remarks, the National Vice Chairman North East Zone, Mr Emmanuel Njuwa, who stood in for the National Caretaker Chairman of the party, Sen. Ahmad Makarfi, congratulated the newly elected executive and tasked them on rejigging PDP in the state by carrying everyone along.
“You have a great task to deliver PDP in 2019. From today, you must work out a formula for PDP to regain power in Adamawa and at the centre.
“Adamawa is a traditional PDP state and we must join hands and unite to succeed,” Njuwa said.
Posted by Cheta Igbokwe
Labels: News, Politics