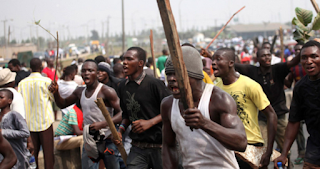 Three suspected armed robbers were yesterday reportedly beaten to death aggrieved resident in Akure, the Ondo state capital.
The deceased were accused of snatching two motorcycles from their owners along the popular Hospital Road.
They were said to have been arrested and beaten by passers-by following an alarm raised by one of the victims.
Sources said they were later rescued from the scene by the police but died before getting to the hospital
Posted by Cheta Igbokwe
Labels: Crime, News