Menu
Home » News » MINISTER OF STATE FOR PETROLEUM, IMO STATE GOVT, OIL COMPANIES, AND STAKEHOLDERS IN THE OIL PRODUCING COMMUNITIES IN THE STATE MEET IN OWERRI

MINISTER OF STATE FOR PETROLEUM, IMO STATE GOVT, OIL COMPANIES, AND STAKEHOLDERS IN THE OIL PRODUCING COMMUNITIES IN THE STATE MEET IN OWERRI 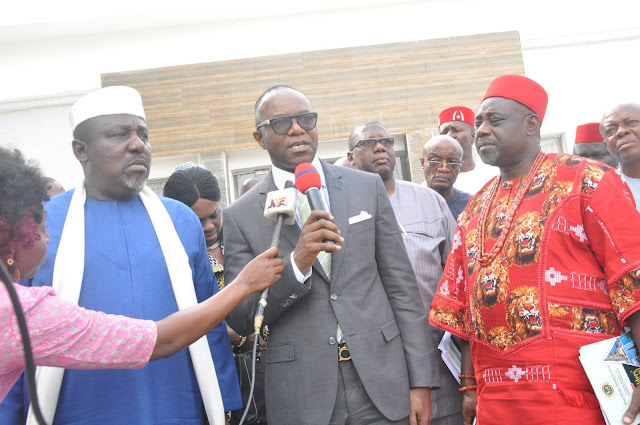 - AS GOVT, STAKEHOLDERS BLAME OIL COMPANIES FOR MOST OF THE PROBLEMS IN THE OIL PRODUCING COMMUNITIES

Governor Rochas Okorocha, Minister of State for Petroleum, Dr. Ibeh Kachukwu, Oil Companies, traditional rulers and Stakeholders from the Oil Producing Areas of Ohaji/Egbema and Oguta, Friday, November 16, 2017, Ifeanyicy.com learnt met at the Government House Owerri and deliberated on issues concerning the Oil Producing Communities.
According to a press statement by Okorocha’s Chief Press Secretary Sam Onwuemeodo, welcoming the Minister, representatives of the Oil Companies and the Stakeholders from Oil Producing Communities to the meeting, Governor Rochas Okorocha stated that the Oil Companies Operating in Imo State behave in such a manner that they end up creating crisis for the State and problems among the youths and stakeholders in the Oil Producing Communities through factionalization and cult activities which always lead the people of the Communities killing themselves.
He said “today the State government spends almost N65million monthly to pay Security agencies to maintain peace in Ohaji/Egbema and Oguta. Meanwhile, we don’t benefit directly. Last time we carried out an amnesty programme where we had to engage 2,833 youths. And everyday, most of them are on our payroll just to stop the arms and the avengers”. 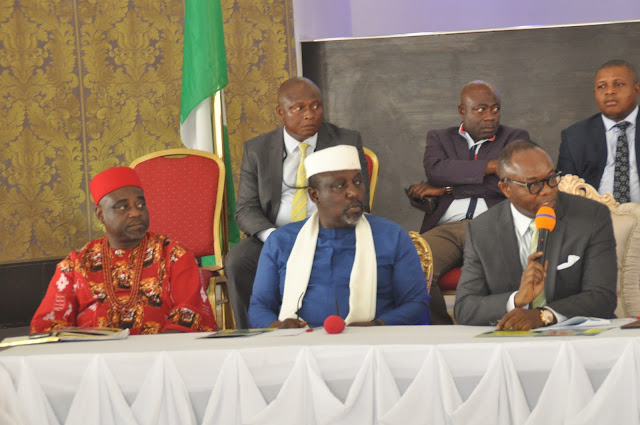 He continued “again the Federal Government promises to Ohaji, Egbema and Oguta when the Vice President came here, are yet to be fulfilled. I spoke with him and he promised that something is going to be done. I hope something will be done immediately”.
He further stated “On the abandoned skill acquisition Centre in Ohaji/Egbema, we agreed with the Federal Government to turn it into University of Science and Technology, but as at my last discussion with the Vice President, we agreed that it should be turned into a University of Agriculture. That will help our people instead of allowing that completed huge project abandoned”.
His words “The 330MV Egbema Gas Plant abandoned which was wrongly contracted and wrongly executed has been laying there for the past Seven years and that is a monumental waste. Over 740 U.S. dollars has been wasted. Yet they cannot produce one light bulb. So, I have asked the Federal Government to allow the State take over the plant”.
The Minister, in his speech said, they have come for the meeting to find lasting solution to the problems in the Oil Producing Communities, adding that at the end of the deliberations a technical committee would be set up to harness and streamline all the discussions including the grievances for actions.
He remarked “Oil will not be an asset in the next 30 years. So, the host Communities should maximize their benefits now and put it to proper use and Oil Companies must start negotiating with the host Communities and the government to know exactly what they need as part of their Corporate responsibilities”.
A traditional ruler from the Oil Producing Areas, HRH Eze Emmanuel Assor said “the Oil Companies have failed in their corporate responsibilities to the Communities and that the trend must change for the sake of peace in the Oil Producing Communities”.
Prof. Maurice Iwu who spoke on behalf of the Imo Economic Development Initiative, asked the Federal Government to remove all the bottlenecks holding the State Government from taking over the Power Plant at Egbema as the State has the Capacity to attract investors to complete the plant, adding too that the Industrial Park the State Government is building does not require cash from the Federal Government, but only validation.


At the end of the deliberations which lasted for hours, a technical Committee was set up with Engineer Kingsley Uju representing the government as the head, while two people from the Federal Ministry of Petroleum and one member each from the Oil Companies and two members from the Oil Communities are members.
Posted by IfeanyiCy Njoku
Labels: News