Man Shot Dead In Port-Harcourt After Withdrawing Money From ATM 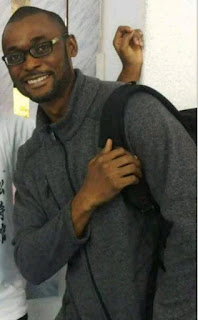 Mr Christopher Ojika aka 'Scanner' was shot in the chest and stomach on Saturday 28th October 2017 at about 4pm. Sadly he is now addressed as late and in past tense.
He was shot as he returned from an ATM where he went to withdraw money to fix his vehicle which was being attended to at a nearby mechanic workshop.

This happened in Port Harcourt Metropolis, Port Harcourt is too rough you might say but it might interest you to know that it was not the gunman's bullet that killed the fine young gentleman who was so full of promise. It was the rot in our Healthcare Delivery System, the Health Worker's poor attitude to work, total disregard to the Hippocratic/Florence Nightingale's oaths and our total disregard for human life......

Judge for your self;

The young man having been shot fell on the floor and was calling for help, everyone took off in a million directions and fortunately a brave Good Samaritan decided to assist the young man who identified himself and asked to be rushed to First Rivers Hospital where he received treatment under his company cover.

Upon arriving the hospital he was not attended to, he even identified some nursing staff at the facility who had attended to him in he last and beckoned on them to help him, his appeal fell on deaf ears as a ?doctor came out and asked that he be referred.

Those attempting to help the young man decided to rush him down to the Military Hospital Port Harcourt believing that will be the 'best' place for gunshot wounds to be attended to. Alas they were wrong as first aid was administered and he was referred to The Teaching Hospital..

At this point I can only say that Mr Christopher was confirmed dead at about 3am, he had remained conscious while waiting to be taken to the theatre and died 11 hours after being shot without being operated on.
Money was not a problem as everything requested for was provided.
Christopher was snatched from his young beautiful wife who is carrying the child they've both been longing for.
Posted by Unknown
Labels: Crime