Leave our lands for us - Abuja indigenes protest against the Army 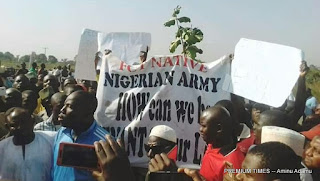 Scores of protesters on Tuesday morning blocked the Zuba-Kaduna highway in Abuja to protest what they said was the excessive granting of land to the Army in the Nigerian capital.

The protesters carried placards with diverse inscriptions and halted movement of traffic on the usually busy highway.

The protesters said they are original indigenes of Abuja and that their farmlands had been given to the army without adequate compensation.

The vice chairman of Zuba council, Kasimu Muhammed and the Emir of Zuba, Bello Muhammad came to the scene of protest to address the natives appealing to them to not block the highway.

According to Mr. Muhammed, a committee has already been set up to discuss the issue.

“The committee has been set up to discuss this issue. It includes the chief of army staff, the (FCT) Minister and the Emir of Zuba”, he said.

The Emir of Zuba also expressed shock at the development.

According to him, the army should be held responsible if the protest degenerated into a free for all.

“I expect the Nigerian Army to be law abiding people. If there is any violence in the course of this protest by the youth, the Nigerian Army is to blame because the committee that was set up to deliberate on this matter includes the Chief of Army Staff himself. Resolution has not been reached yet but the Nigerian Army has started working on the land.
Posted by Cheta Igbokwe
Labels: News