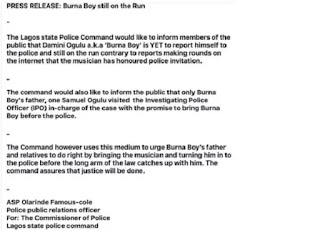 Contrary to the management's smooth cooperation claim, the Lagos State Police command have revealed Burna Boy's current actions as it affects their investigation. According to the released statement by the police, the artist is yet to show up at their station and might be on the run.

The statement stated that Burna Boy's father made a visit to the police station with a promise to bring the singer to them but he is yet to do so.
Posted by Cheta Igbokwe
Labels: entertainment, Music