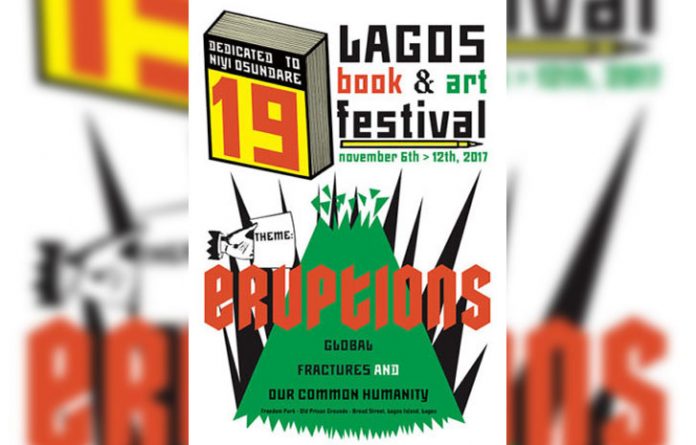 The 19th edition of the Lagos Book & Art Festival, LABAF, focusing on the theme: ERUPTIONS: Global FRACTURES & Collective Humanism,” will hold November 6-12 at the Freedom Park, Lagos. The pre-festival events hold from Monday November 6 through Wednesday, November 8 at various venues, while the main festival is November 9-12.

Explaining the theme, the programme directorate of the festival, says: “The theme is primarily inspired by the convulsions in the global political and economic space; the sort of angst that’s led to the emergence of Donald Trump and now upsurge of the ‘supremacist’ and rightists’ movements in the United States; the decision by 17.4 million British voters to leave the European Union; the siege on Europe by Islamic militias; the crises in the Middle-east, which have led to millions of refugees besieging Europe; the resurgence of ‘separatist’ rhetoric from some youths in different regions of Nigeria etc. We wish to examine the implications of all these actions on the fundamental rights and privileges of affected people; and in general, our collective humanity”.

The2017 festival is “dedicated to the Poet laureate, Professor NiyiOsundare,” stated Toyin Akinosho, secretary general of the Committee for Relevant Art (CORA) promoters of the festival.

He described Osundare as a “true national and cultural icon,” who has influenced generation of younger poets and writers, helping them to find their voice and developing their own styles.

The 18th edition was dedicated to the dramatist, Professor Femi Osofisan, who, as Festival Special Guest of Honour was present at all the sessions of the festival the promoters of the festival that started in 1999 as a “literacy and human capital development campaign.”

The festival will also honour some icons in the Nigeria culture and creative industry sector, who clock landmark birthday anniversary (usually those just attaining the milestone ages of 80s,70s and 60s) in the course of the year
Posted by Cheta Igbokwe
Labels: Art, Culture