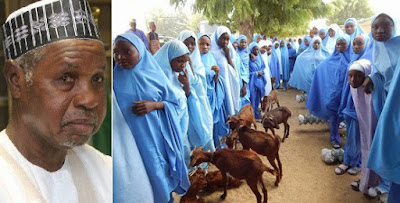 Aminu Masari, The Governor of Kaduna State has launched goat empowerment programme for secondary school students in the state.

The state commissioner for Education, Halimatu Idris, said the programme was aimed at empowering students to be self-reliant. He said this at the Launching of the programme at Government Girls Arabic Secondary School, Dutsinma on Saturday.
The commissioner further said that the empowerment program is part of the government’s effort toward improving people’s lives and development of education in the state.
Idris also said that 20 secondary schools were selected from the state’s three senatorial zones for the take-off of the programme.

A citizen of Katsina State who commented about the empowerment program said the goats were given out to only female students in secondary schools to rear for a year. He added that the students are expected to return the mother goats to the government and have the kids for themselves.
Posted by Cheta Igbokwe
Labels: Politics