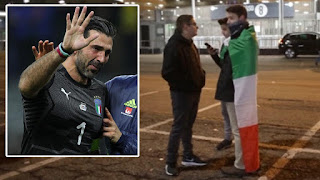 Italy fail to qualify for World Cup for second time in their history after San Siro stalemate against Sweden.

The Azzurri, four-time champions of football's pinnacle tournament, will be spectators at Russia 2018

Sweden qualifies on 1 : 0 aggregate
Sweden are going to the World Cup finals in Russia at the expense of four-time champions Italy after a stalemate at the San Siro.

It was an Italian onslaught in the second half with chances coming thick and fast.
But the visitors held on, leaving Jakob Johansson's lone strike in the first leg enough to send the Swedes through to next year's tournament.

This is the first time since 1958, and the second time in their history, that Italy has failed to qualify for football's blue riband event.
Posted by Unknown
Labels: Sports