"I Don’t Have N1bn To Give Jonathan" - Metuh Tells Court 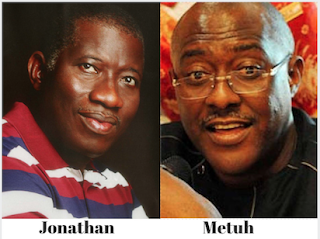 Embattled former National Publicity Secretary of the Peoples Democratic Party, PDP, Chief Olisa Metuh, has asked the Federal High Court in Abuja not to set aside the subpoena it issued to compel former President Goodluck Jonathan to appear as a witness in his ongoing trial.

Metuh further challenged Jonathan’s insistence that the defendant must deposit with the court, for and on behalf of himself, the sum of N1billion in line with provisions of Section 241(2) of the Administration of Criminal Justice Act, 2015, before he would mount the witness box.

Jonathan had in a motion his lawyer, Chief Mike Ozekhome, SAN, moved before the court on Wednesday, urged trial Justice Okon Abang to compel Metuh to pay the N1bn to cover travelling expenses for himself and his security personnel from his home town, Otuoke in Bayelsa State, to Abuja and also for time that he might spend appearing before the court as President of Nigeria between 2010 to 2015. Jonathan maintained that the evidence Metuh is seeking from him would amount to an invasion of his personal right to privacy, and family life as provided for in Section 37 of the Constitution of the Federal Republic of Nigeria, 1999.

He told the court that the evidence sought to be obtained from him was likely to expose him to a criminal charge, penalty or forfeiture. The former President further argued that the subpoena ad testifiandum Justice Abang issued against him on October 23 was vague, applied for and obtained on frivolous ground and in bad faith, saying it was meant to embarrass him as a person.

Besides, Jonathan argued that Metuh was not a personal aid or his appointee and therefore could not have dealt with the President directly under any circumstance to warrant the invitation of the applicant to testify in the charge. He said there was no nexus between hiim and Metuh and the charge for which the defendants are standing trial.

However, the ex-President said he was not doubtful of the fact that there was a contractual agreement between Metuh and the former National Security Adviser, Col. Sambo Dasuki, retd. Ozehkome said: “The linchpin of this application is not that the former President is throwing doubts on transactions involving the defendants and Dasuki, but that he was not physically present when the transactions were going on, because he had many appointees.

“Whatever evidence he will be giving based on the subpoena will amount to hearsay evidence”. Neverthless, in a five-paragraphed counter- affidavit that was moved by his lawyer, Mr. Emeka Etiaba, SAN, Metuh said he does not have N1bn to give Jonathan who he said had in his own motion admitted that he (Metuh) served the nation well. Etiaba drew attention of the court to the fact that the bailiff earlier deposed an affidavit that he had yet to serve the subpoena on Jonathan.

“This application is therefore not only soeculative but premature and deserves to be struck out. “With respect to demand for deposition of N1bn, the 1st defendant in his affidavit averred that he does not have such amount. “We believe that such demand is punitive and meant to frustate the 1st defendant’s attempt at obtaining an evidence that will assist him in the defence of the charge against him before this court. “It is the view of the 1st defendant that from the first day that he was arrested, he made it clear that the release of the money was authorised by the former President and was released by the former NSA, Dasuki.

“My lord this application simply seeks to set aside the subpoena and to save this nation the embarrasment of having a man who means a lot to the entire country as a former President, to step into the dock to give evidence.
“My lord it is unprecedented, and the embarrassment could have been aborted if the charge against the 1st defendant was not preferred after he had disclosed to the EFCC the source of the fund for which the defendants are standing trial. “My lord in the circumstance, it is our position that this application be struck out”, Etiaba added. On its part, the EFCC, through its lawyer, Mr. Sylvanus Tahir, told the court that it would remain indifferent to Jonathan’s application. Meantime, the court is still entertaining arguments from all the parties, including Dasuki who is asking Justice Abang to hands-off the trial for the Court of Appeal to decide the merit of appeal he lodged to void subpoena issued to also compel him to testify in the matter. It will be recalled that Justice Abang had on October 25, handed the bailiff five days to serve the subpoena on Jonathan to enable him to appear as a witness in Metuh’s trial.

EFCC had in the seven-count charge it preferred against Metuh and his firm, Destra Investment Ltd, alleged that the defendants had before the 2015 presidential election, received N400million from the Office of the National Security Adviser, ONSA, without executing any contract. It said the fund which was released to Metuh and his firm by the erstwhile NSA, Col. Sambo Dasuki, retd, was part of about $2.1billion earmarked for the purchase of arms to fight insurgency in the North East. He was equally accused of money laundering. EFCC alleged that Metuh engaged in an illicit transaction that involved $2m
Posted by Unknown
Labels: Politics