Menu
Home » Politics » ''History Will Not Be Kind To Obama!'' - Reno Omokri On Slavery In Libya

''History Will Not Be Kind To Obama!'' - Reno Omokri On Slavery In Libya

Reno Omokri reacts to the situation of slavery in Libya were sub-saharan Africans attempting to cross into Europe from Libya are sold into slavery.

''When Gaddafi was in power, there was no slave trade of Black Africans in Libya. As a matter of fact Gaddafi gave financial aid to Black African nations and almost single handedly funded the fight against White minority rule in the then Rhodesia (renamed Zimbabwe) and against apartheid in South Africa (Google it. Even Mandela said so openly in America). Barack Obama staged his removal and now Black Africans are being sold in Libya and you think Obama is good and Gaddafi was bad? All over Africa, from Libya, to Egypt, to Nigeria, Obama intervened without caring what Africans really wanted and saddled us with incompetent regimes that are taking Africans backward. History will not be kind to Obama!'' 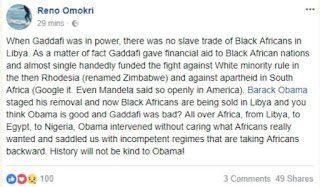