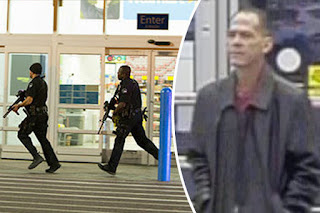 According to a Daily Star UK report, a gunmen shot dead three people in a Walmart supermarket – and police have caught a suspect after a manhunt.
The gunman fired up to 30 shots inside the Walmart in Thornton, Colorado, at 6.30pm (12.30am UK time).
Daily Star UK reports that the area was on lockdown with cops warning people to stay well away from the store.
Thornton Police Department tweeted at the time: "Shooting just occurred at Walmart, 9900 Grant St, multiple parties down. Please stay away from the area."
Now police have confirmed they have taken a suspect into custody.
They launched a manhunt for 47-year-old Scott Ostrem – releasing an image and details of him – later tweeting they had caught him.
A Walmart employee described horrifying scenes inside the store.

The unnamed worker said: "I was by customer service and I started to hear loud pops and it kept going, 'pop, pop, pop' probably six pops.

"Everyone got down, everyone started screaming – it was crazy".
One person wrote on Twitter: "Woman just ran up to me and said her son is in Walmart. Says he told her he heard 30 shots, helped save an elderly woman."
Another tweeted: "Police everywhere at the Thornton Walmart as family members look for loved ones who were inside."
Shoppers are said to have fled the supermarket and nearby shops, while restaurants were evacuated.
At least two men and a woman have died, cops confirmed.
Posted by Cheta Igbokwe
Labels: International news