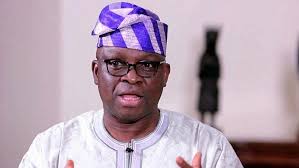 Ekiti State Governor, Ayodele Fayose, has signed into law, the bill prohibiting secret cults, terrorism and prescribing death sentence on anyone caught in the act.

While appending his signature to the bill at the Government House in Ado-Ekiti on Monday, Fayose said the law was a confirmation of the unwavering commitment of the state government to combating terrorism in the state.

A statement by his Chief Press Secretary, Mr Idowu Adelusi, said the governor frowned on the resurgence of the scourge in the state, especially among students in tertiary institutions.

“From now, any person who is a member of a secret cult, whether or not the person is in possession or in control of any offensive weapon but commits the offence, is liable to conviction to death.

“Any person who gives financial or material support or assistance to a secret cult or in any manner sponsor the activities of a secret cult, commits an offence under this law and is liable for conviction to imprisonment for life” he said.

The governor further warned that anybody, who intentionally encouraged the organising of a secret cult meeting or activities in places such as houses, nightclubs, hotels and other places would be committed to life imprisonment.
Posted by Unknown
Labels: Politics